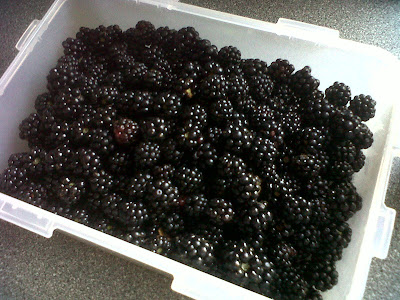 So, the summer hols have come to another end.  As you may know, I work in a school for my day job so I, like lots of gleeful children, get 6 glorious week off in the summer.  Now, its has to be said that the weather hasn't been fabulous but its been ok, and,  if  I am honest, I am not that bothered.  Its just nice to have time for walking, fruit picking, gardening, knitting, sewing and cooking.  Phew! how do I get time to work at all?  I do a lot of these things during term time too but just more of it in the hols.

There is always a degree of catching up with jobs like painting  the deck and trips to the recycling centre with LOADS of weeds. I even tidied the undersink cupboard!  This is an achievement for me.

My newest passion is jam!!!  Who knew it was that easy? Who knew I would become addicted?  I have not actually bought a jar of the stuff in a whole year.  We started off with just bramble last autumn. Then rhubarb and vanilla earlier in the year when the rhubarb was reduced loads in waitrose. Same in early summer when the strawbs were going for a song.  Recently I have gone on a foraging rampage and we have apple and blackberry jam and raspberry (foraged from my own garden) and blackberry jelly.  I have even considered picking hawthorn berries for jelly as I read they are perfectly fine.

So, here is what is left of my jam cupboard she says proudly. Needless to say,  I have nommed quite a lot and various family members have made off with a jar or two. I need to get some of those pretty tops going on really.  Chutney is the next project for half term. I have a fab recipe for Christmas. I may share if you are all very nice to me. 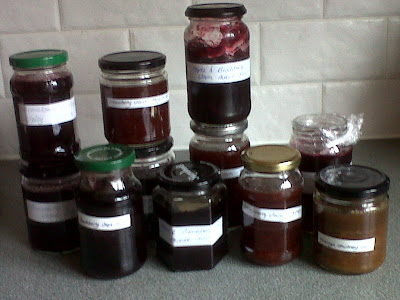 Don't worry, there has been sewing and knitting.  I have a couple of Halloween collectibles to show off next time and have even made a lovely Christmas bear with a bit of a panda look about her. Because that IS creeping up I am afraid. Think its about 15 and a half weeks or thereabouts.
Posted by Joy at 07:50