As you know, I love to bake cupcakes.  It has for some time been a dilemma for me when my dear daughter comes to visit because she eats vegan but loves cake.  So last week I had a search around for vegan cupcake recipes.  Several problems cropped up. The first being that they were all US recipes that called for cups as measurements.  Now this is odd because I didn't have anything accurate for measuring that. Then as if by magic, I had a birthday last week and my work colleague got me these measuring cups as a gift. Timely or what! 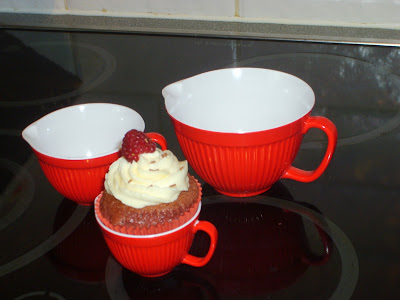 The next thing is its a double whammy for us because I have to eat gluten free. Sheesh!
However, I found a recipe. The first batch was less desirable, so I tweaked the recipe and the results were very pleasing. Those raspberries just keep on coming. 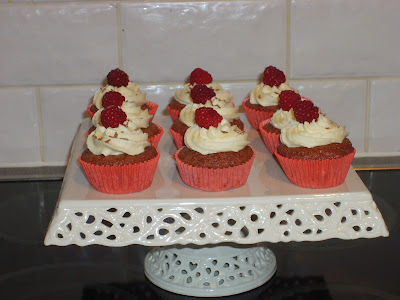 This is what I used. You will need measuring cups for this. I know mine came from Waitrose but i guess you can get them other places.


.75 cup gluten free flour-I used glutafin  This has a bit of raising agent so if you use a plain one, up the baking powder by another teaspoon.
.
1tsp baking powder

1.5 tsp cider vinegar (if you dont need gluten free you can use white malt vinegar)

.5 tsp vanilla essence
.5 tsp strawb food colour. you can add a bit of red colour too if it does not look red enough.


I made 9 in bun cases. Just mixed it all thoroughly in the food mixer and put in cases.  Baked at 180degrees centigrade. My oven took around 18 mins but do check them as our ovens all vary.
﻿
For the frosting,
this is in ounces as that's how I work I am afraid.
6oz icing sugar
2oz vegetable based margarine
1oz white veg fat. I prefer Trex
Dash of vanilla extract and a little water if needed.

This mix gives nice flavour which is not too sickly IMO.  Just beat it all together until its nice a fluffy and soft enough to pipe.  The raspberries and cake stand are not obligatory but they do look kinda nice